Richard MacDonald (American, b.1946), internationally renowned figurative sculptor, has created an exact replica of his monumental sculpture, “The Flair” to be presented at the Richard MacDonald Studio at Ryan Ranch, Monterey. In this work, the artist depicts the extraordinary tenacity and determination of humanity towards excellence, “Triumph of the human spirit.”

In 1996 the original sculpture, “The Flair,” was a gift from the artist to the city of Atlanta and the Olympic athletes. The monument was exhibited across the country with celebrations in San Francisco, Beverly Hills, Carmel, Laguna Beach, Dallas/Fort Worth, Michigan Avenue in Chicago, Central Park at the Plaza in New York City, and the museum Corcoran Gallery of Art in Washington, D.C., before being permanently installed in the Georgia International Plaza, in Atlanta, for the Olympic Games.

As interest in the spirit of the Olympics peaks with the Olympic Games in Rio de Janeiro this summer, the sculpture captures the commitment to excellence at the Olympics. It is a tribute to athletes but also, in a broader sense, a tribute to all who strive and triumph.

Learn more about the year-long process of creation, the nation-wide tour and the themes and scope of the 26-foot-tall bronze at FlairAcrossAmerica.com.

One of the most notable figurative bronze sculptors at work today, Richard MacDonald is known internationally for his achievements in sculpture, painting and drawing. Represented in private and public collections in London, Singapore, Barcelona, Paris, Hong Kong, and in the Corcoran Gallery in Washington D.C., Richard MacDonald’s career has been distinguished by his commitment to excellence, quality and the celebration of the human spirit. Learn more at RichardMacDonald.com. 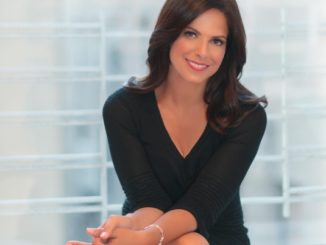