This fall, the Philadelphia Museum of Art presents Off the Wall: American Art to Wear, a major exhibition that highlights a distinctive American art movement that emerged in the late 1960s and flourished during the following decades. It examines a generation of pioneering artists who used body-related forms to express a personal vision and frames their work in relation to the cultural, historical and social concerns of their time.

Focusing on iconic works made during the three decades between 1967 and 1997, the exhibition features more than 100 one-of-a-kind works by more than 50 artists. Comprised primarily of selections from a promised gift of Julie Schafler Dale, it will also include works from the museum’s collection and loans from private collections. Off the Wall: American Art to Wear is accompanied by a new publication of the same title, co-published by the Philadelphia Museum of Art and Yale University Press.

The champions of Art to Wear during the early years were a few forward-thinking museums, among them New York’s Museum of Contemporary Crafts (Museum of Art and Design), collectors, and galleries such as Sandra Sakata’s Obiko, founded in 1972 in San Francisco, and Julie Schafler Dale’s Julie: Artisans Gallery, which opened the following year on Madison Avenue in New York. For over 40 years, Dale’s gallery was a premier destination for presenting one-of-a-kind wearable works by American artists. Through her gallery installations and rotating window displays, she gave visibility to the Art to Wear movement. In 1986, she brought further recognition to the art form by publishing the seminal book Art to Wear—from which the title of this exhibition is taken—which provided in-depth profiles of artists alongside photographs by Brazilian fashion photographer Otta Stupakoff. Dale’s gallery closed in 2013.

Off the Wall: American Art to Wear is arranged in nine sections; the titles of some are derived from popular music of the 1960s and 1970s to suggest the wide-ranging concerns of the artists. The introductory section, The Times They Are A Changin’ (Bob Dylan, 1964), contains works by Lenore Tawney, Dorian Zachai, Claire Zeisler, Ed Rossbach, and Debra Rapoport to illustrate how textile artists in the late ‘50s and ‘60s liberated tapestry weaving from the wall, adapting it to three-dimensional sculptural forms inspired by pre-Columbian weaving. In 1969, a group of five students at Pratt Institute studying painting, sculpture, industrial design, multimedia, and graphic design taught each other how to crochet, leading to remarkable outcomes. Janet Lipkin, Jean Cacicedo, Marika Contompasis, Sharron Hedges, and Dina Knapp all created clothing-related forms that they would describe as wearable sculpture, thus establishing a cornerstone of the Art to Wear movement. A highlight in this section is a wool crochet and knit Samurai Top, 1972, by Sharron Hedges, modeled by the young Julie Dale for the book Creative Crochet, authored by two of the artist’s friends, Nicki Hitz Edson and Arlene Stimmel.

The next section, Good Vibrations (Beach Boys, 1966), traces the migration of many of these young artists from the East Coast to the West Coast where they joined California’s vibrant artistic community and connected with Sandra Sakata’s Obiko. A pair of colorful denim hand-embroidered mini shorts by Anna VA Polesny embroidered while traveling conveys this new youthful spirit. Pacific Rim influences are evident in the Japanese kimono form as a blank canvas offering infinite possibilities for pattern and design. Katherine Westpahl’s indigo blue resist-dyed cotton work, A Fantasy Meeting of Santa Claus with Big Julie and Tyrone at McDonald’s, 1978, and Janet Lipkin’s Mexico at Midday, a coat made in 1988 are exceptional examples. A range of counter-culture influences, evoking ceremony and spirituality, pervade this section.

Come Together (The Beatles, 1969) responds to the popular use of assemblage in art-making, especially the use of nontraditional materials. It also looks at the art of performance, reflected in Ben Compton and Marian Clayden’s Nocturnal Moth, 1974, inspired by Federico Fellini’s film La Dolce Vita (1960). “Mother Earth,” a nod to the publication Mother Earth News Magazine, looks to nature and environmental concerns while This Land is Your Land (Woodie Guthrie, 1940) explores iconic American imagery including reference to the American West and Native American cultures. Examples in this section include Joan Ann Jablow’s Big Bird cape, 1977, made entirely of recycled bird feathers, and Joan Steiner’s Manhattan Collar, 1979, which reimagines New York’s skyline in miniature.

Other Worlds explores fantasy and science fiction, two genres that offered young people an escape from the period’s cultural and political upheavals. Noteworthy here are works by Jean Cacicedo and Nina Huryn, both of whom riff on one of the most widely read English language books at the time, J.R.R. Tolkien’s trilogy Lord of the Rings (1965). Cacicedo responded with a portrait of Treebeard, 1973, a Tolkien character, while Huryn created her own fantasy world in Tree Outfit, with its flowing pants, loose shirt and leather sleeveless jacket containing forest and folklore imagery, a work made especially for Julie: Artisans Gallery in 1976. Other artists turned to dreams, such as Susanna Lewis, who created Moth Cape, 1979, in response to a nightmare that she had of a giant moth enveloping her body.

A section called I Am Woman (Helen Reddy, 1971) underscores the ways in which artists invoked feminism directly and indirectly in Art to Wear. Janet Lipkin, for example, invested her works with symbols of freedom while searching for new directions in her life, as seen in Bird Coat, 1972, Flamingo, 1982, and Transforming Woman, 1992. Other works like Combat Vest, 1985, by Sheila Perez, feature plastic toy soldiers as protective armor for the chest area, while Nicki Hitz Edson’s Medusa Mask, 1975, is a wild expression of fraught emotions surrounding the breakup of her marriage.

Colour My World (Chicago, 1970) reflects the buoyant rainbow color spectrum that was ubiquitous during this era. Recently published works on color theory by Johannes Itten and Josef Albers provided a cornerstone of the new art education. For Linda Mendelson, color, typography, and text became inseparable. She adapted Albers’s ideas relating to after-images in Big Red, and linked color progression with lines from a poem titled Coat by William Butler Yeats from which she drew inspiration. Other artists such as Tim Harding created an effect similar to impressionist brush strokes by slashing and fraying dyed fabrics, as seen in his colorful coat Garden: Field of Flowers, 1991.

The final section Everybody’s Talkin’ (Harry Nilsson, 1969) explores the use of text in Art to Wear. JoEllen Trilling engages in visual word play using common prepositions on a jacket, while Jean Cacicedo channels her grief over her father’s death using words taken from the bible that celebrated his life in My Father’s House, 1994.

Are you interested in finding a full line-up of riveting exhibits and special events including yoga and children’s activities at one of the world’s leading museums? For more information, visit Philadelphia Museum of Art. 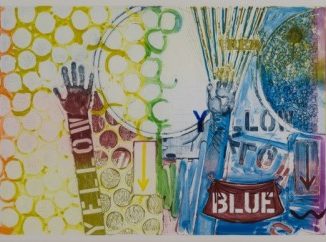 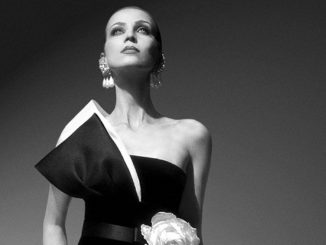