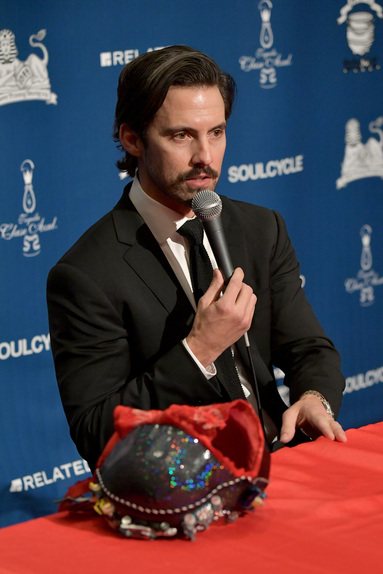 The Man of the Year festivities started early on Feb. 8, 2019, when Mr. Ventimiglia was given a tour of Farkas Hall and the Hasty Pudding Clubhouse, followed by a private seminar with the members of the Hasty Pudding Theatricals. In the evening, Mr. Ventimiglia was given the Pudding’s traditional roast and was then made to earn his Pudding Pot as part of a big fight with Rocky Balboa, his fictional father in the Rocky and Creed movies.

Some of the tasks that MILO VENTIMIGLIA had to perform included rapping the entire theme song of the Fresh Prince of Bel-Air. To close out the festivities, the Hasty Pudding Theatricals members gave the opening night performance of their 171st production, France France Revolution, the historic first with casting open to all genders.

BRYCE DALLAS HOWARD (right, center) received her 2019 Woman of the Year award at the end of January. Established in 1951, the Woman of the Year Award has been given to many notable and talented entertainers including Ella Fitzgerald, Meryl Streep, Whoopi Goldberg, Julia Roberts, Halle Berry, Kerry Washington, Octavia Spencer and, most recently, Mila Kunis, the 68th Woman of the Year.

Hasty Pudding Theatricals took Howard back to school by having her prove her mettle as an actress by fake crying on command for a commercial directed by “Professor Shakespeare.” Among other activities, she also had to face a velociraptor in a basketball dunk-off as part of a fictional Jurassic World sequel, Jurassic Globetrotters.

On receiving her award, BRYCE DALLAS HOWARD said, “I will never forget this as long as I live, and please accept my children into Harvard.”