When you need to watch a light-hearted movie with guaranteed laughs Bean (also known as Bean: The Ultimate Disaster Movie or Bean: The Movie) is the ticket.

In this  hilarious film, Rowan Atkinson plays a security guard who constantly falls asleep on the job at the National Gallery in London. When he is transferred to the Grierson Art Gallery in Los Angeles, Mr. Bean is mistaken for an art scholar, sweeping him into a series of out-of-control mishaps. With characteristic clumsiness, he manages to bumble his way through meetings in preparation for a talk about “Whistler’s Mother.” While studying the painting, he sneezes on the image’s face before frantically attempting to repair the damage with his handkerchief.

Rowan Atkinson‘s signature physical comedy always leaves a distinctive mark. His wide-eyed, child-like innocence and easy connection with kids foil his appearance as an adult. Through twisted facial and body contortions as well as grunts forming his own unique language, Mr. Bean excels at communicating through pantomime-like gestures.

The family temporarily harboring this loose-canon boy-man is of particular interest in Bean: The Ultimate Disaster Movie. The wife, Alison (Pamela Reed) registers natural impatience with Mr. Bean‘s destruction throughout their house. His antics, including a madcap kitchen scene showing Atkinson’s head stuck inside a turkey, sends her packing with their children until the frustrated and forlorn husband, David (Peter MacNichol) ensures Mr. Bean‘s permanent removal.

Many other memorable moments prompt eruptions of belly laughter, even after seeing the movie several times. One occurs in a men’s bathroom, when Mr. Bean stands on a box, moving his hips in front of the hand-dryer to reverse an accidental water soaking. Another involves his thief-like museum break-in to repair the damage on “Whistler’s Mother” with a personally concocted egg-based mixture.

Although some scenes verge on slap-stick comedy, Bean: The Ultimate Disaster Movie is another one of Atkinson’s important reminders not to take ourselves too seriously.

To read more exclusive reviews, join Artsphoria’s community at https://www.patreon.com/artsphoria. If you are interested in Artsphoria’s art, book, music, movie and other preview/review services, sign up to claim your reward now! 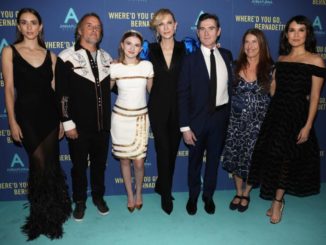