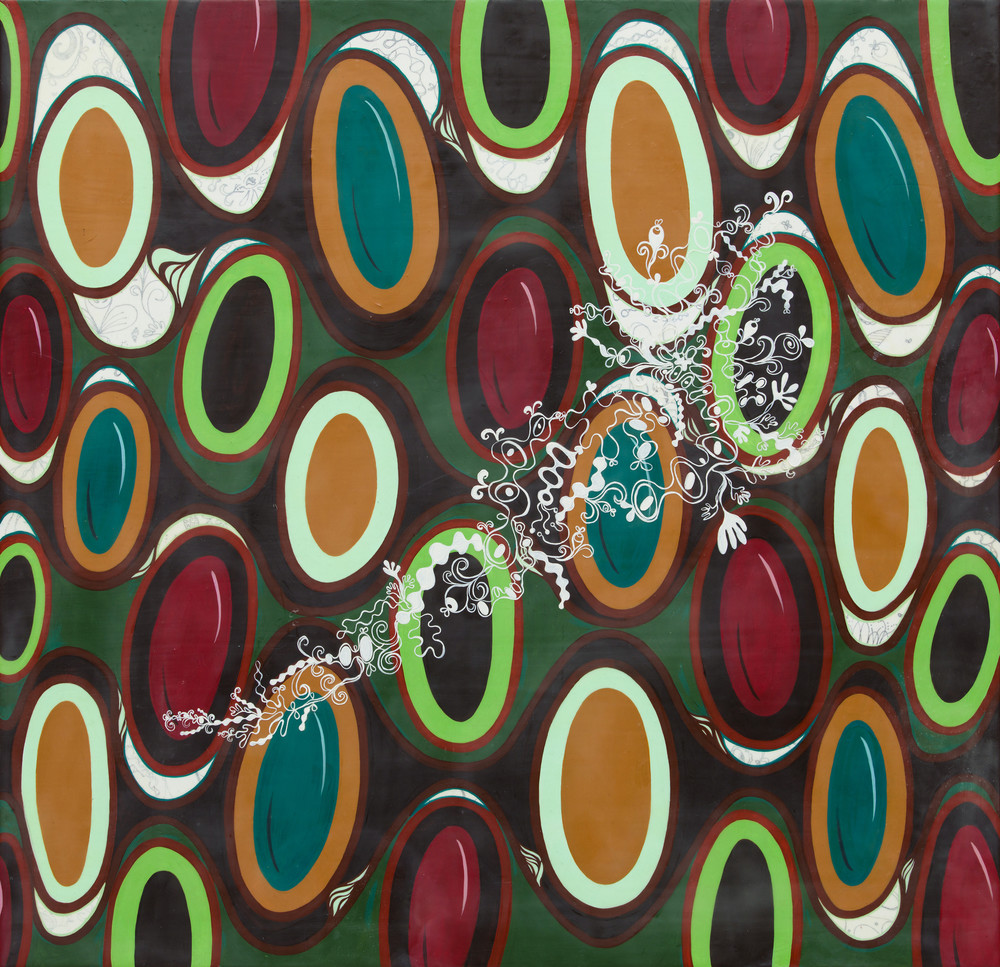 Are you an artist searching for inventive ways to display your work? You’ll find inspiration from native Portland artist Cynthia Mosser who has three paintings featured on the national TV series, Portlandia (Season 8, Episode 5).

Mosser is known for her layered, whimsical, abstract, mixed-media paintings. The Portlandia series is in its last season, and her work is prominently featured in Episode 5 (“Open Relationship”). Episodes are now available on Netflix.

“I was thrilled to see my paintings on a national show,” says artist Cynthia Mosser. “I have always felt my work suited the quirkiness and mood of Portlandia. The idea of having my paintings nationally televised is a definite dream-come-true.”

Portlandia is a sketch comedy television series set and filmed in and around Portland, Oregon, starring Fred Armisen and Carrie Brownstein.The show was produced by Broadway Video Television and IFC Original Productions. It was created by Armisen and Brownstein, along with Jonathan Krisel, who directs it.

Cynthia Mosser has been creating art in the region for more than 18 years. Her paintings have been exhibited in solo and group exhibitions in the United States and abroad including the Czech Republic and Hungary. Her work has been critically reviewed in ARTnews Magazine and Willamette Week Newspaper.

Cynthia received a B.A. in art history from Whitman College in Walla Walla, Washington, and attended Pratt Institute in Brooklyn, New York. She is an adjunct faculty member of the Art Institute of Portland, and is represented by the Augen Gallery in Portland, Oregon.

Could you explain how your artwork was discovered and selected for Portlandia?

The way in which my art came to be featured on the TV show Portlandia is pretty simple. I live near Portland, Oregon (which is also where the Portlandia headquarters were located), and saw a call for art on Instagram from a woman named Bridget Larrabee. Bridget organized the art for Portlandia, so I responded by sending her an email of my available paintings. She chose three and instructed a date in which to drop them off. I did just that (dropped them off), in clearly marked boxes.

Three months later (September 2017), I picked them up. I saw from tape on the boxes that they made it to set; I just didn’t know if they actually were hung and used in a scene. About three weeks ago (June 15, 2018), my friend happened to be watching the newest episodes on Netflix (Season 8, Episode 5) and recognized my art. The rest is history.

Why do you think that your “work suited the quirkiness and mood” of the show?

My art is quite colorful, high in contrast and can appear whimsical. In that regard, I felt my work suited the eccentric, kooky aesthetic and feel of the show.

In what ways does Portland inspire or influence your work? I grew up in Portland, and what is interesting, is that nobody cared about Portland 30 years ago. Everybody called it a town, instead of a city, and it was often passed over when you looked at a map of the West Coast. It was either Seattle or Los Angeles that mattered. What I do know about Portland is the fact that is full of nature and that is my main inspiration.

I grew up on an acre full of ivy, tall trees and lots of flowers, so nature was always right up in my face. Today, Portland’s nature is still an inspiration, but it is the feeling and creativity of Portland that inspires me most. There is something in the air, a wave of thinking that espouses and encourages creativity, and that, aside from nature, keeps me and my art going. I feel lucky to have grown up and live near, such a great city.

How did you connect with West Elm for a pop-up display, and what did you discover while showing your work in a business setting?

Before I exhibited my work at West Elm, I saw an artist who exhibited a pop-up shop at Williams Sonoma. A few months later, a friend of mine suggested I try having a pop-up at West Elm, so I called them up. I was referred to a woman (Deb Zsori) who organizes their shows and sent her my website and my interest in the idea. She approved my work and sent me a date for the show; I brought my work over and created a display of originals and reproductions. What I enjoyed about the pop-up was the ability to connect with my ideal clients – those who like and feel an affinity with my work.

What would you advise other artists when considering and pursuing unusual ways to show their work?

In regard to artists and their desire to show their work in unusual ways, I would suggest keeping an eye open to calls for art.  I would also do some research on the venue and person organizing the show if you see a call that suits you. Additionally, consider photographing your table or set up, so the organizer can see the professionalism you embody.

What have you learned as an instructor and what do you hope students take away from your classes?

What I have learned from teaching art and design for over 18 years, is that I don’t always have all of the answers, and that many times, I learn directly from the students themselves, whether it is about color or a particular art technique.

Within any course I teach, I hope the students take away something they can apply to their own professional lives, or with which they can educate their own clients. I also hope they are inspired to continue pursuing their art or design career using the knowledge they have gained.

Why were you interested in teaching Doodling for Creativity, and why is this approach useful for creators?

I was interested initially in teaching Doodling for Creativity as a way for the lay person to experience what I experience when I doodle: happiness, calm and focus. Now my approach is to help people try again what they stopped doing when they were younger: play.

John Hendrix, a children’s book illustrator, said something I like. He said that as we get older, we stop having fun. We are so focused on survival as adults, that we forget how to express our own creativity or voice. Sometimes we even lose our voice. Doodling is away for adults to try their hand and creativity if they don’t know where to start, and ultimately to play. If it helps them come up with a new idea, even better!

Would you like to add any other points about your work or process?

Like my Doodling for Creativity class, my work is truly about whimsy and play. I experienced the necessity and everyday aspect of play and whimsy when I lived in Europe, especially Prague. They don’t question play (or art), and I see fanciful artistic elements throughout the city and within their culture. It feels like a breath of fresh air.

As simple-minded as play may sound, my goal is for those who look at my art to experience an internal joy. I want others to experience what I experienced when I created the painting: happiness and ecstasy. And in order to keep that loop going, I have to continue my own self-care: travel and looking at things I like.

After learning about composition, light, shadow and color in art school, I had to find my own path again. Doodling or working in a sketchbook proved a fruitful and essential foundation for my own artistic life.