At a time when the notion of belief is particularly fraught, Secular Icons in an Age of Moral Uncertainty at Parafin in London examines contemporary takes on some of the objects we turn to for meaning or solace.

Pictures, screens, movies, and commodities are filtered here through formally abstract conceptual propositions, linked by a sense of indeterminacy. Taking its title from Nathan Coley‘s eponymous grids of fairground lights, the exhibition brings together forms of image-making, which – while redolent of an art history spanning from Byzantine icon painting to 20th-century avant-gardes – decidedly engage with the now.

Which “now” they specifically address, though, remains open to interpretation: Is it the lure of gore, of entertainment, of luxury? The grisly spectacle of terrorism or the untapped riches of technological obsolescence?

More than the objects themselves, what’s under scrutiny in Secular Icons is the act of looking, the dynamics driving our gaze, and the multitude of projections a collection of pieces so radically distinct encourages.

Nathan Coley is perhaps best known for his large-scale illuminated text pieces, such as There Will Be No Miracles Here (2006), which often challenge the human compulsion to belief. Coley’s series Secular Icon(s) In An Age of Moral Uncertainty (2007-8) reduces the text pieces’ formal language to its bare-bone sculptural elements: metal structure and fairground lights. What remains are ambiguous light boxes at once minimal and saturated with visual memories of the funfair as well as of the now-ubiquitous glow of the smartphone screen.

Illuminating their viewers, Coley’s Secular Icons are simultaneously authoritative and frivolous, awe-inspiring and toy-like. Like most of the works in the exhibition, these pieces articulate a push-and-pull, endlessly unresolved.

If an icon is primarily understood as an object standing for, and allowing access to, another entity – be it religious or cultural – then Indrė Šerpytytė’s 2 Seconds of Colour (2015) is among the most icon-like pieces in the exhibition. Her monumental light boxes bring to mind geometric abstraction, but their referent is gruesome. The artist captured the blocks of color that first come up in any Google Images Search  before the pictures are fully loaded.

Here the burnt red, deep brown, and opaque black rectangles were triggered by the term “Isis Beheading.” They stand in for the desert sand, the sky, as well as the victims and executioners’ bright clothing. The stark emotional detachment of these Mondrianesque compositions is a powerful response to the mechanisms of spectacle increasingly cultivated by extremist groups.

Šerpytytė’s pieces forbid any pathos while communicating through their size, and sheer volume, something of the horrors of war and of the folly of any forms of fanaticism. Like all icons, they carve out a space for reflection, connecting us to a reality that cannot be fully comprehended.

Mimosa Echard’s Braindead (2015) also contrasts opposites, namely the tension between its seductive, shimmery veils and the gory images the series is based on (all lifted from Peter Jackson’s 1992 comedy horror movie of the same name). To compose each work, the artist spreads silver acrylic paint on one of the film’s ketchup-red stills. She then covers it with a thin piece of fabric and lets it harden. When the photograph is torn away, some of its pigments remain embedded in the paint. 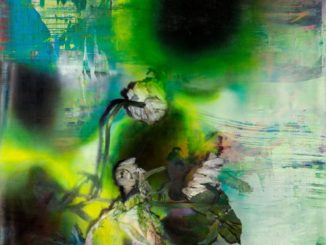 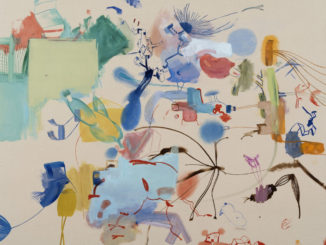 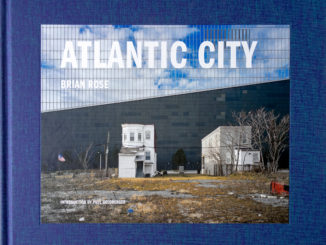