The 2017–18 MetLiveArts Artist in Residence, the boldly inventive choreographer and artistic director Andrea Miller of Gallim, will premiere Stone Skipping at The Temple of Dendur in The Sackler Wing on October 28 and 29. The premiere marks Miller’s debut as Artist in Residence at The Met. Stone Skipping is an ambitious new work inspired by one of the Museum’s most beloved and iconic artifacts, and it is the first evening-length, site-specific dance performance created for The Temple. It will generate a choreographic conversation between the artifact’s multifaceted history and journey to The Met, with the dancers carving out a narrative of movement based on the acceleration of environmental change and deterioration through time that is a result of human interference.

Andrea Miller is the first choreographer to be named Artist in Residence at The Met. Throughout her yearlong exploration of the collection and galleries, the Museum will commission several new works by this daring choreographer as well as offer visitors and audiences the chance to see into her creative process through open rehearsals during Museum hours and workshops, such as those offered during Teens Take The Met.

The performances on Saturday, October 28, and Sunday, October 29, will begin at 2 p.m. in The Temple of Dendur in The Sackler Wing. Tickets start at $65.

As part of her residency, Andrea Miller and Gallim will premiere a new durational work at The Met Breuer this spring, May 22–27, 2018.

About MetLiveArts
The groundbreaking live arts series at The Metropolitan Museum of Art explores contemporary performance through the lens of the Museum’s exhibitions and unparalleled gallery spaces with singular performances and talks. MetLiveArts invites artists, performers, curators, and thought leaders to explore and collaborate within The Met, leading with new commissions, world premieres, and site-specific durational performances that have been named some of the most “memorable” and “best of” performances in New York City by The New York Times, New Yorker, and Broadway World. 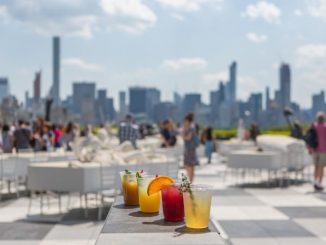